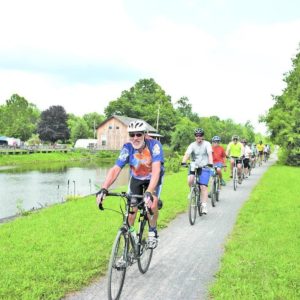 Every summer, cyclists leave their cars behind in Buffalo to pedal along the historic Erie Canalway Trail to Albany for Parks & Trails New York’s annual Cycle the Erie Canal bike tour.

The 400-mile journey along the legendary Erie Canal ends in Albany eight days later. Along the way, cyclists enjoy some of the finest scenery, most interesting history, and unparalleled cycling in the United States.

Covering between 40 and 60 miles per day, cyclists travel along the Erie Canalway Trail, which is now more than 85 percent complete and the east-west axis of the statewide 750-mile Empire State Trail.