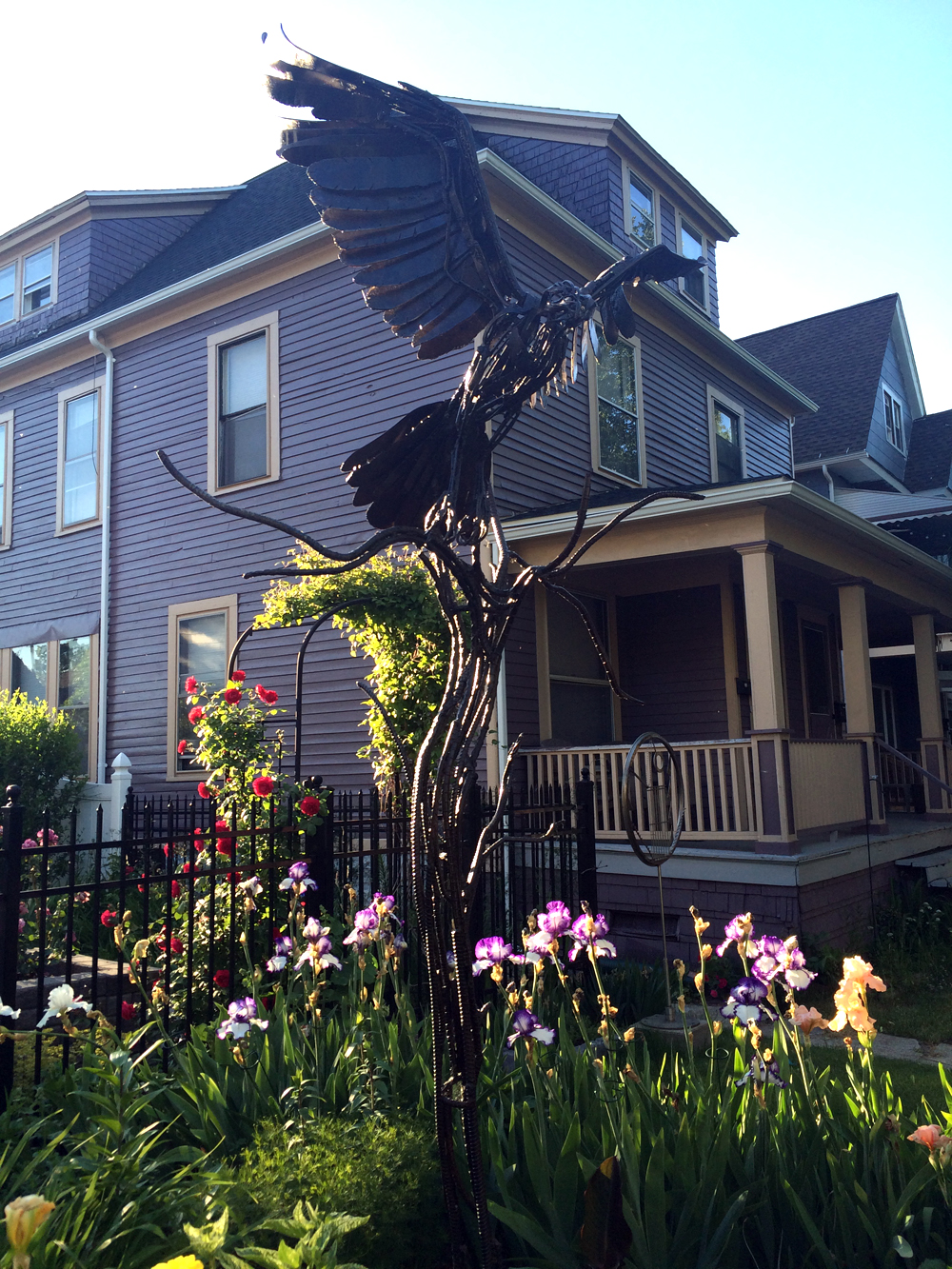 In 2007 a house burned down on Baynes Street, just around the corner from Dorchester Road, Buffalo’s garden street. One of the neighbors, whose lot situation did not allow for an accessible garage, decided to purchase the lot and build a garage there as well as provide off street parking for guests. To improve the neighborhood’s appearance and avoid creating a barren appearance in the space, a small semipublic garden space was created out front.

The garden is named after Fred and Margaret Dierdorf, who were avid gardeners and very active garden club members in Rochester in the 1940s, 50s and 60s. Their garden was located on a fairly small city lot, similar to many of those that can be seen on Garden Walk Buffalo today. The couple also greatly enjoyed garden tourism, visiting many of the gardens that were open to the public across the country in those days, such as Longwood Gardens. If Garden Walk Buffalo were in existence in those days, visiting it would likely have been a favorite activity for them.

In addition to being an avid gardener, Fred Dierdorf was an artist, musician and inventor. He patented an electric violin in 1924. In 1911-1912, he was musical director of a showboat, the Cotton Blossom Festival Theater, steaming up and down the Ohio and parts of Mississippi river. (Edna Ferber apparently was unaware there had actually been a boat named the “Cotton Blossom” when she wrote Showboat.) He also, at times, led a dance band and several marching bands.

Fred and Margaret were both particularly fond of roses, so the garden includes a small raised rose garden (interspersed with hardy geraniums {dwarf cranesbills}). The space in front of that closer to the sidewalk and street provided the ideal space for installation of a sculpture.

In July 2012, a new sculpture, Osprey Taking Flight by artist Wendy Klemperer, commissioned for the site, was installed. The 10 foot tall piece is a gestural representation constructed of rebar and other metal the artist collects from scrapyards.

Pleased with the composition, the artist also created another version, Osprey Landing, which was installed at the Martin’s Point Bridge connecting Falmouth and Portland, Maine: http://wendyklemperer.com/tag/outdoor-sculpture/

Wendy Klemperer is a well-known New York artist, specializing in animal sculpture, whose studio is located in Brooklyn. Born in Boston, she attended Harvard-Radcliffe College, with a degree in biochemistry, then Pratt Institute, where she earned a BFA in sculpture.

Her work has been exhibited extensively in NYC and throughout the United States, including installations at Socrates Sculpture Park, Queens, NY, the Bridgewater-Lustberg Gallery, NY, NY The DeCordova Sculpture Park and Museum in Lincoln MA, and Pratt Institute Sculpture Park in Brooklyn, NY. Her large scale permanent installations include: Glimpse, a group of eight sculptures on the entryway drive to the Portland International Jetport, ME, Urban Pastures at 560 Broadway in NYC, Circle of Wolves, a large multipart sculpture at the Lay Sculpture Park in Missouri, Black Elk at Somersby Landing Sculpture Park in Newburyport, MA , Wolves and Deer on the entryway drive at Coastal Maine Botanic Gardens, and pieces at California State University at Bakersfield, the LL Bean Company in Freeport, Maine, Key Bank Plaza in Bangor, ME, Westminster, CO, and SIAS University in Xingzheng, China.

Also, installed at the site is a smaller sculpture, One-Eyed Jack, by local sculptor Eugene Cunningham. Cunningham uses objects and materials, generally industrial, that can be found in local scrapyards, looking for unusual shapes and surfaces of polished stainless, richly rusted or painted steel, which he then welds and transforms into abstract sculpture.

Cunningham was born in Buffalo, received his M.D. degree at Creighton University School of Medicine in Omaha, Nebraska, and has worked as a nephrologist in Buffalo. He trained under sculptor Rod Dowling at Art Park in Lewiston, New York and at Zoos Sculpture and Zoological Park in Stevensville, Ontario. Besides One-Eyed Jack, other permanent outdoor installations include Arc with Circle at the Amherst National Bank Building and Arc Major and Trifoliate both at Artsphere in Buffalo. Smaller sculptures are in many private collections in Western New York.

Cunningham’s sculpture has been exhibited at many galleries throughout the region, most frequently at Artsphere Studio & Gallery on Amherst Street. 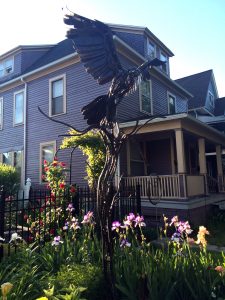