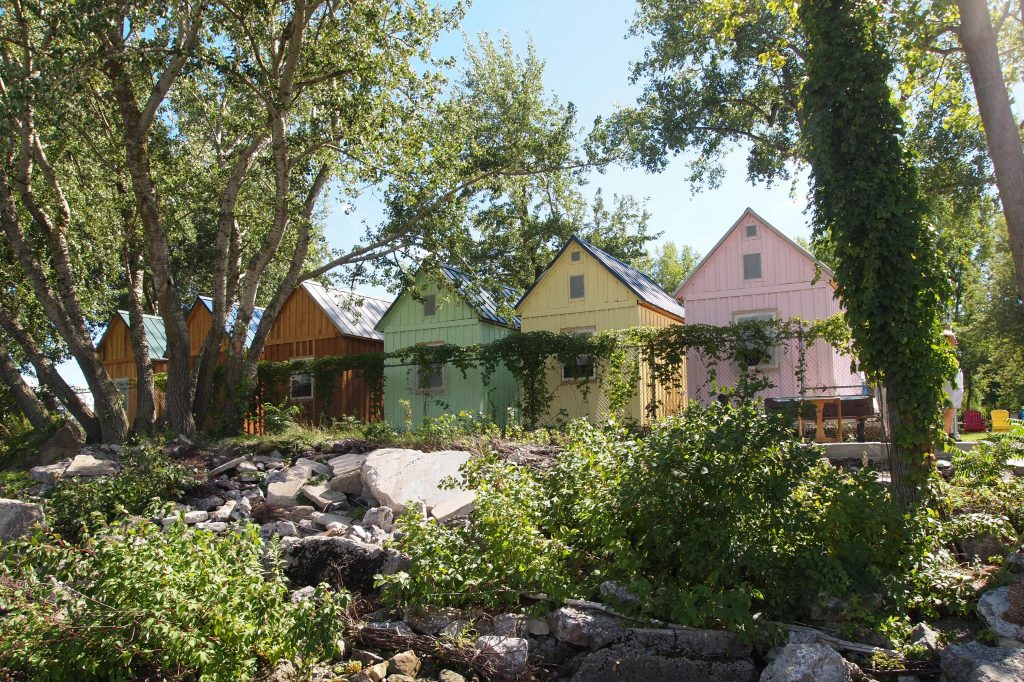 CJS Architects is the recipient of the 2016 Pro Bono Publico Award in Design Excellence for their notable commitment to Sail Buffalo.

AIA Buffalo / WNY Volunteer Architects and Allied Colleagues are the recipient of the 2016 Pro Bono Publico Award in Distinguished Service for their notable commitment to the VFW and American Legion Posts of Erie County. This award recognizes exemplary pro bono services, rendered in the public interest without fee or with a significant reduction in fees, provided to not-for-profit clients. Thirteen firms in total participated in surveying existing conditions of local VFW and American Legion posts, making them eligible for needed funding. The participating firms are:

Dirk Schneider, AIA for Services to the historic Chautauqua Amphitheater

Thinking Outside the Square and Inkwell Studios are the recipients of the 2014 Pro Bono Publico Award in Design Excellence for their outstanding efforts on the exhibit Buffalo’s Bethune:  America’s First Woman Architect.

Shining a well-deserved spotlight on Louise Blanchard Bethune, the first woman to become a professional architect in the United States, has been a long-time passion project for Kelly Hayes McAlonie, AIA. Her impetus for a pioneering exhibit to educate the public about the relatively unknown, but extraordinary Bethune was the 2011 National Trust for Historic Preservation Conference in Buffalo.
Read More

Brian McAlonie, Vice President of Client Services for Thinking Outside the Square (TOTS), and Michael Gelen, Principal of Inkwell Studios, embraced the challenge of translating few artifacts and scant personal information into an engaging, enlightening and beautiful exhibit that reveals the hidden history of Louise Blanchard Bethune and her accomplished firm Bethune, Bethune & Fuchs.

As Gelen notes, “pro bono projects tend to bring together people with true passion and energy, and reconnect us with the enthusiasm that brought us to our respective fields.” He created iconic, memorable silhouette illustrations for each of the seven exhibit panels themed by key aspects of Bethune’s life. McAlonie curated the exhibit, authored the text, managed the process and directed the team. TOTS fabricated and installed panels.

Displayed from October 2011 through April 2012, Buffalo’s Bethune garnered wide-ranging media attention, including coverage in Architectural Record, USA Today and the Washington Post. The exhibit is now, fittingly, on permanent display in Bethune’s masterwork, the recently renovated [email protected] Lafayette. McAlonie reflects that “Bethune’s story is in the midst of emerging from its hidden past. I believe that through pro bono work, (we) can help to tell these hidden histories.”

Flynn Battaglia Architects are the recipient of the 2014 Pro Bono Publico Award in Distinguished Service for their notable ongoing commitment to the Buffalo Lighthouse Visitor Center project. This award recognizes exemplary pro bono services, rendered in the public interest without fee or with a significant reduction in fees, provided to not-for-profit clients.

The Flynn Battaglia team of Principal Peter Flynn, AIA, Preservation Leader Michael Lennon, AIA, Design Leader Christopher Less, AIA and Architectural Planner Courtney Creenan-Chorley, Associate AIA mentored and collaborated with the fraternity students to study precedents, develop a concept design and establish site strategies. The new visitor center is planned to be located near the site of the 1905 U.S. Lifesaving Service Station at Lighthouse Point in the Outer Harbor. Referencing the footprint and form of the original wood-shingled building while expressing a modern, transparent aesthetic, the illuminated cultural venue will offer strategic connecting views to the lighthouse, the Buffalo River, Lake Erie and downtown Buffalo. Influenced by rescue boats, the interior shell of the exhibit hall will be clad in warm wood with rugged cast iron fittings.

The Buffalo Lighthouse Visitor Center and related site improvements will support the 1833 Buffalo Lighthouse by enriching the visitor experience with a tour staging area, a museum for artifacts, unique indoor event space and outdoor gathering places. BLA President Michael N. Vogel praises Flynn Battaglia for working closely with the organization to meet the project goals magnificently. The pro bono design work will enable BLA to share their vision with the Coast Guard, the State Historic Preservation Office and funding agencies as they pursue this long-term project.

When Silo City owner Rick Smith sought a new habitat for a thriving honeybee colony in the window of an abandoned office building that he planned to renovate, the University at Buffalo (UB) School of Architecture and Planning Ecological Practices Graduate Research Group coordinated the Hive City Bee Habitat Design Competition and unanimously selected the iconic design submitted by the Hive City team.

While pursuing Master of Architecture degrees this Spring, the five students documented and constructed Elevator B. Rigidized Metals worked with the team to develop shop drawings and fabricated the stainless steel panels that clad the tower. The 22 foot-tall Elevator B is a beacon to Silo City, visible from Ohio Street and Route 5. Visitors can view the honeybees in all life cycle stages through a “bee cab”, a cypress hexagonal box with a laminated glass bottom that can be raised and lowered within the protective tower.

“The excitement of seeing the project realized was palpable,” observed Professor and Dean Robert G. Shibley. Elevator B attracts visitors of all ages for educational and cultural opportunities ranging from lessons in ecosystems to photographic studies. Tifft Nature Preserve hosts field trips to the tower that will expand into a program examining threats to honeybee populations and Colony Collapse Disorder.

The Hive City team remains proactive “bee advocates” leading tours of Elevator B. UB Assistant Professor Joyce Hwang noted that “on top of their already heavy course loads, they took on this project with great enthusiasm and with a degree of thoroughness that truly ‘wowed’…They exhibited an incredible sense of accountability at every stage of the process.”

BAF applauds the Citizen Architects of the Hive City team for contributing an elegant, innovative design to a Buffalo industrial heritage site and a valuable educational resource to the community.

Buffalo Architecture Foundation (BAF) is pleased to announce Scheid Architectural, PLLC as the recipient of the Pro Bono Publico Award in Distinguished Service for their ongoing efforts on the Gospa Village project. This award recognizes exemplary pro bono services, rendered in the public interest without fee or with a significant reduction in fees, provided to not-for-profit clients.
Read More

Founded by Douglas M. Scheid, AIA in 1994, Scheid Architectural has demonstrated a long standing commitment to pro bono projects for several not-for-profit organizations. The firm is also a registered participant in The 1% Challenge, a national program which asks architecture and design firms to dedicate one percent of their working hours to pro bono services. In early 2010, St Luke’s Mission of Mercy approached Scheid Architectural to develop the design concept for “Gospa Village”. (“Gospa” is Croatian for “mother”.) Scheid took a leadership role, recruiting other key consultants to provide pro bono services to the project as well.

In order to provide a stable, supervised living environment for underserved, at-risk single mothers and their children, the Gospa Village project will transform a block of 18 vacant lots west of St. Luke’s Mission of Mercy on the East Side of the City of Buffalo into 12 to 14 single family homes; a shared educational and gathering space called Gospa Center; and a large common green space. Construction will begin later this year and is anticipated to be complete in 2016.

“Our experience with the Mission has been both rewarding and fulfilling. When families rebuild and have support such as St. Luke’s, communities thrive“ stated James Churchill, the Project Manager for the Gospa Village Project at Scheid.

Amy Betros, Co-Founder and Co-Director of St. Luke’s Mission of Mercy, praised Scheid for a “beautiful and incredibly functional” design and for their indispensible expertise in navigating the planning process, “They have truly embraced and poured their hearts, souls and resources into the Gospa Village project.”

BAF applauds the Citizen Architects of Scheid Architectural their devoted, proactive efforts envisioning a supportive community that will have far reaching positive impacts in the lives of its residents, in the immediate neighborhood and to the City of Buffalo.

Buffalo Architecture Foundation (BAF) is pleased to announce Matthew D. Zinski and Michele Han as the recipients of the first Pro Bono Publico Award in Design Excellence for the Capoeira Cultural Arts Center (CCAC) and Sol Rise Homestead project. Partnering as TypSim Industries, Mr. Zinski and Ms. Han are registered participants in The 1% Challenge, national program which asksarchitecture and design firms to dedicate one percent of their working hours to pro bono services.
Read More

The abandoned residence at 226 East Utica Street, surrounded by two vacant lots, had been slated for demolition when CCAC Board Member Joshua Reis and his partner, Emily Gaines became homesteaders of the property with a commitment to the revitalization of Buffalo and a grassroots vision to transform site into an office and a public community space that would be shared by two unique uses: CCAC, is a not-for-profit outreach organization promoting the appreciation of Afro-Brazilian culture in Western New York, and Sol Rise Homestead, which will be cultivated as an urban farm with edible forest gardens, offering classes in Permaculture.

Mr. Zinski has been an active member of CCAC for 10 years, serving on the Board of Directors and as a capoeira instructor. For more than a year, Mr. Zinski and Ms. Han have donated countless hours in the development of the 3,560 sf ongoing renovation project, including design and documentation; construction administration; and hands-on assistance. Private and public spaces, such as the kitchen, studio and meditation space, are defined by a subtle palette of finishes, including many materials that have been sustainably reclaimed from on-site demolition. The resulting finished spaces are open, light-filled and beautifully articulated.

Mr. Reis and Ms. Gaines noted that Mr. Zinski and Ms. Han have “truly taken the time to understand our vision and have bent over backwards to help us reach our goals.”

Buffalo Architecture Foundation (BAF) is pleased to announce Robert E. Stark, AIA as the recipient of the first Pro Bono Publico Award in Distinguished Service for the Buffalo Fire Boat Visitors Center / Firehouse project. Downtown Buffalo is home to America’s oldest working fireboat, the Edward M. Cotter. Built in 1900, this National Historic Landmark actively provides fire protection to the waterfront and icebreaking on the Buffalo River. In 2005, Friends of the Edward M. Cotter formed to promote and steward the vessel. The not-for-profit also seeks to establish a permanent home offering tours and education.
Read More

Since their inception, Friends of the Edward M. Cotter began working with Mr. Stark, Principal of Chantreuil | Jensen | Stark Architects, on a vision to enhance the visibility, connectivity and accessibility of the boat and its dock-side location at Potter’s Wharf. The proposed project includes the renovation of Buffalo Fire Department Engine 20 into a 6,500 sf boathouse and visitor center that recalls its original 1910 design. Signage, landscaping, a boardwalk and water access will further define the site as a destination along the city’s industrial heritage trail.

Mr. Stark spent five years developing conceptual designs, creating three dimensional models, producing promotional materials and supporting grant applications. These efforts have been successful in securing much needed funding. Friends of the Edward M. Cotter praise Mr. Stark for his invaluable efforts: “…he has exemplified the highest design and public service standards in imaginatively conceiving and beautifully illustrating our project.” BAF applauds Citizen Architect Robert E. Stark for his devoted efforts envisioning a vibrant future for the beloved historic fireboat that has served the community for over a century.